Have you wondered why emojis are gaining more and more popularity? Their applications spread from mere time savers in texting to converting marketing tricks in social media communication and newsletter campaigns.

With the high-speed technological progress and with worldwide lockdowns within the past year, we are getting more used to computer mediated communication. And while technology helps us avoid feeling isolated and out of touch from loved ones, it still remains impersonal as we miss the body language and face mimic hints that a standard person-to-person communication brings.

And that’s where emojis step into the picture.

“These expression symbols make up for the lack of non-verbal cues in CMC, and are very well-suited for social media communication”

Emojis Are an Improvised Expression of Our Emotions Online

In live communication, we are used to saving our breath when communicating our feelings. We often prefer to make a face or a gesture instead of verbalize every idea that we wish to convey in a given conversation.

With online communication, we face the challenge of not being able to perceive the complete message. We often feel like we are missing the context of the conversation. It is, as if, one of our senses is crippled and we are no longer able to interpret properly the messages that we are getting.

Emojis make up for that communication gap. As pictograms, they give out illustrative clues as to what the person we are talking to hints at or wishes to say.  Whether it is a sentiment, emotion or even sarcasm – emojis help us easily figure out the nuances of the online expression.

Recent study  on the Linguistic functions of emojis in social media communication concluded that:

The History and Origins of Communication Through Emojis

Remember how in 2015 the Oxford English Dictionary named emoji the word of the year? That sounds as an official affirmation of the developing online emoji communication and its unique aspects and trends.

But where did it all begin? Should we go back to prehistoric times when cavemen drew smiley faces on their rocky walls. Let’s stick to modern times, shall we? 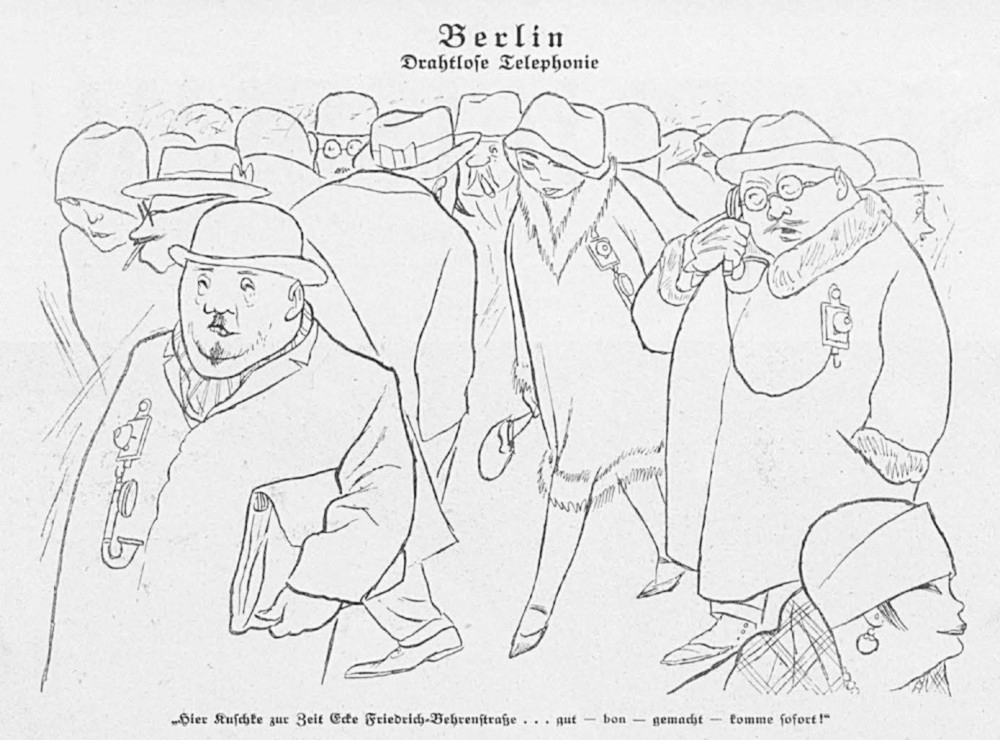 Credits: A drawing by Karl Arnold – Public use of mobile telephones

Let’s take a peek back in time where chatrooms were the fad and people were coming up with all sorts of shortcuts for their online communication.

In the 90’s, the chatroom acronyms were quite common: A/S/L? (age, sex, location – often used as popular first-liner when meeting someone online), ROFL (rolling on the floor laughing – has gradually become obsolete and replaced by LOL) and so on.

And while people did not use emojis as of yet, they did, however, realize the need to incorporate emotions into their computer talk and improvised quite successfully.

Those were the glory days of emoticons enriched text messages and chat phrases with stylized facial expressions of:

The first emoji was born in 1997 as a natural elaboration of the rather simplistic and unsatisfactory visual representation of the emoticons. The J-Phone company released the first set of 70 emojis alongside its new mobile  phone: SkyWalker DP-211SW. 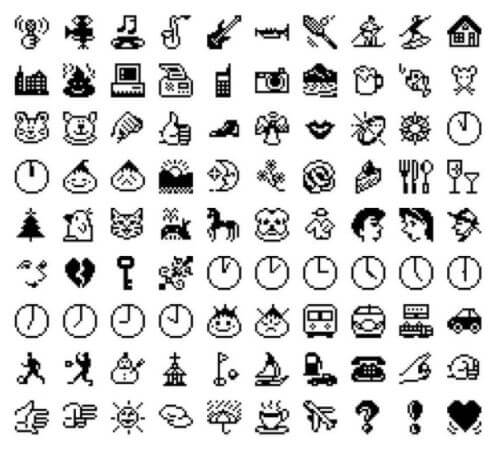 In 1999 the Japanese artist Shigetaka Kurita came up with a set of 176 emoji illustrating weather, traffic, technology, and all the phases of the moon.

It became the first widespread emoji collection and laid the foundation for  the emoji evolution and its consecutive transition into the emojis as we know it today. 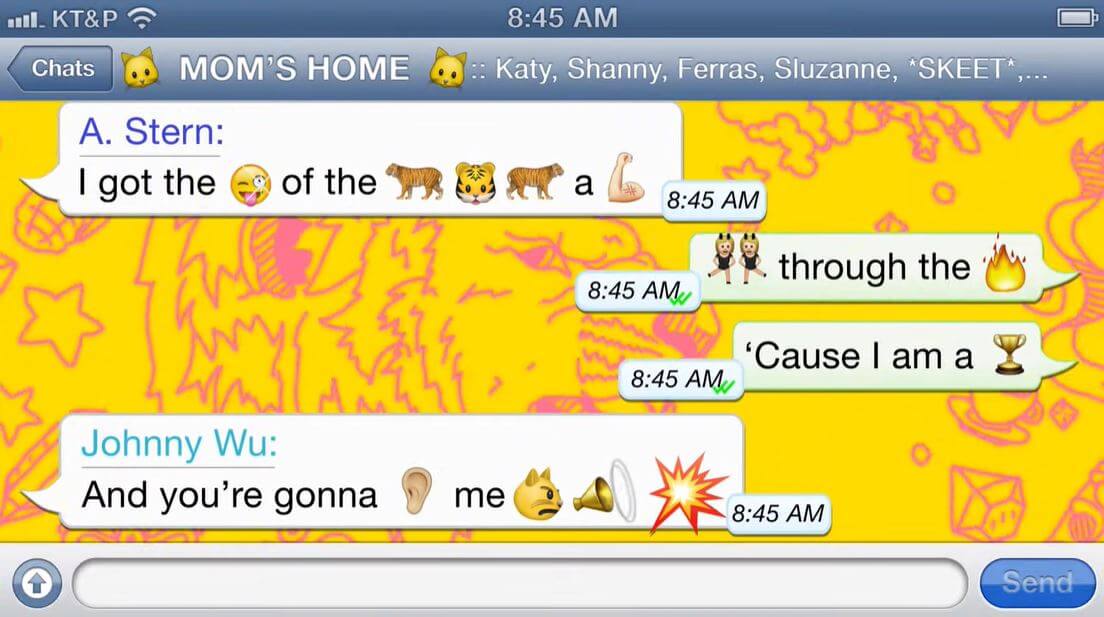 You’ve got tools that help you turn English phrases into emojigrams: 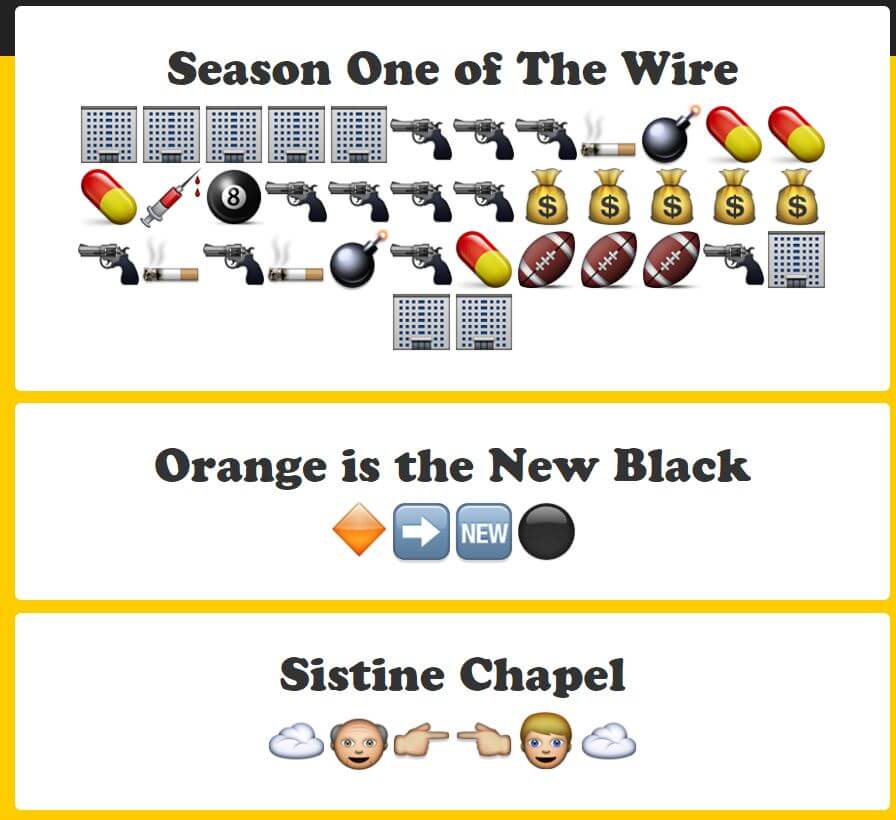 Or translate text and song lyrics into emojis: 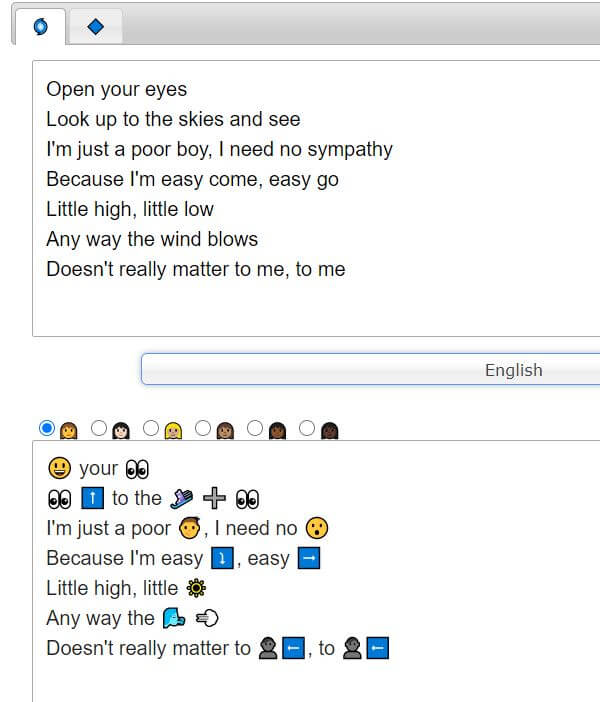 We even celebrate the World Emoji Day on July 17th each year.

But what is more is that we already have emoji commercials: 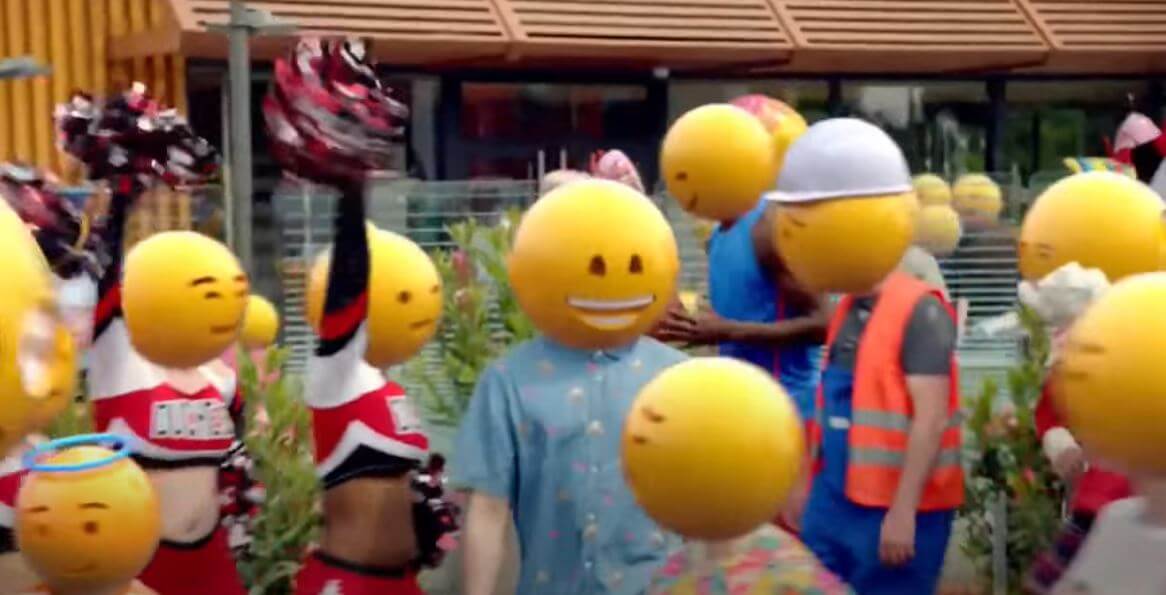 Even politicians encourage the emoji culture:

Twitter introduced emoji ad targeting to facilitate businesses reach their target audiences. They also give their users the ability to use emojis in their search.

Managing a successful marketing campaign definitely translates to staying up-to-date with how and where your target audience prefers to communicate. Emojis are revolutionizing the online social patterns, so don’t ignore the trends, and seize the opportunity instead.

To increase revenue and market share, a lot of companies try to tie their customers’ brand preference with an emotional attachment. The emotional connection with a brand also motivates people to become loyal customers and even brand advocates (depending on the intensity of the emotion the brand has managed to trigger in them).

But how do you nourish such an emotional connection? A company should first invest in studying its target audience, learning its emotional motivators, and then planning on how to scale those, HBR concludes. Companies within the financial services, retail, health care, and technology verticals are closely working on the emotional aspect of their products and services with the attempt to attract and retain potential and current customers.

According to HBR research, the top 10 emotional motivators (among the list of 300) that drive customer behavior are: 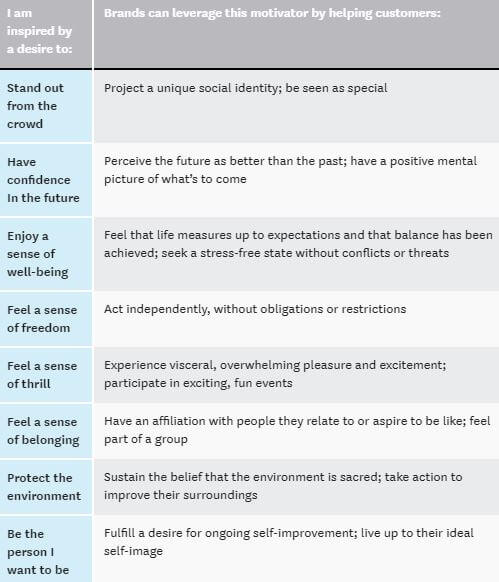 Of course, measuring those emotional motivators is somewhat hard. Emoji data to the rescue.

Seizing the emoji trend has an interesting outcome as it comes to Facebook ads. Many brands report skyrocketing increase in lead generation campaigns that integrate emojis in their ad copy.

The emoji communication on Facebook has many unique aspects to it:

Let’s take the care emoji for instance – it is not a standardized Unicode emoji. Instead it is available only to Facebook users. It was introduced in April 2020 as a result of the Covid-19 pandemic and has made its way into Facebook user’s ‘vocabulary’ rather quickly. As a business owner who is actively listening to your target audience, you should be fluent in the social media language of your current and potential clients and never miss an opportunity to engage with them in an authentic and honest way.

Moreover, Facebook takes the emoji race a step further and they give a whole new toolset in the hands of their users: the stickers library. As much as the stickers might appear to be over-the-top “accessories” to your social media communication strategy, you should stay tuned for their possible integration to your online communication campaigns.

Chatbots are an invaluable asset for brands who wish to offer exceptional customer support. But how to overcome the serious challenge of offering a robotized response to your valuable clients’ feedback and questions?

The answer is pretty easy, actually – emojis can make AI feel human, much more appealing and pleasant to talk to.

A close analysis on emojis usage could shed some light on people’s predispositions and main topics within a given period.

For instance – in 2020, a year of pandemic lockdowns and worldwide news covering virus and bacteria threats, Twitter saw an increase in the microbe emoji, Emojipedia says.

There is a general trend of steady growth of emojis usage in tweets for the past year. One in every five tweets now includes at least one emoji: 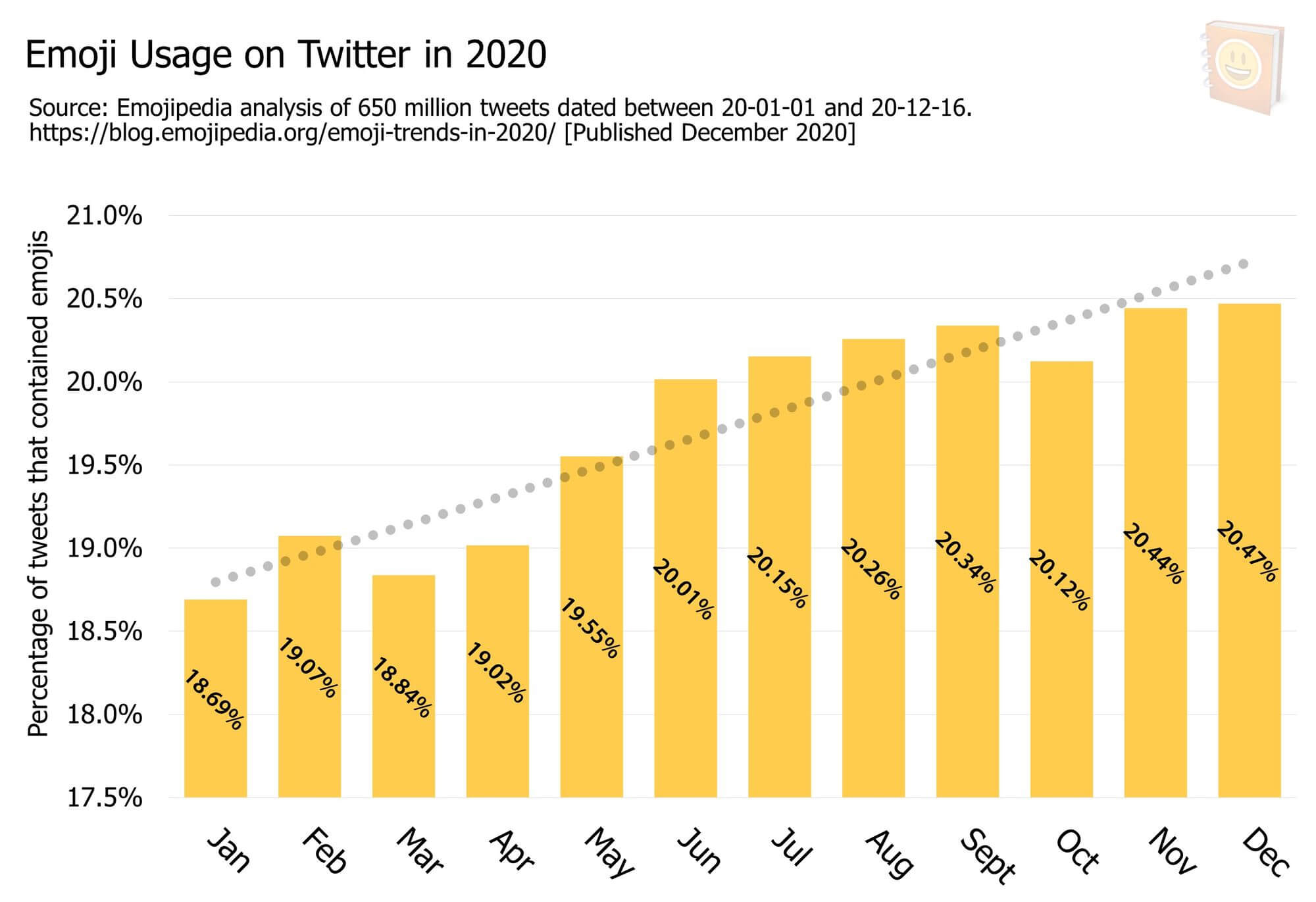 An interesting conclusion on the emojis nature on Twitter is that the emojis used generally have a positive sentiment.

Another curious thing to note is that the top 5 emojis used on Twitter actually convey highly intense emotions:

And the emojis that saw a continued growth within the past year are the emoji Folded hands and the emoji Smiling face with hearts. The ones that marked the highest growth rate, however, are the Yawning Face and Pinching Hand.

In terms of overall decline, obviously, the trend is shared by the Airplane emoji and the sports emojis (football, basketball, baseball).

The emoji usage is a great way to analyze and learn more about your audience. The above study delves upon general emoji usage on Twitter and pretty clearly and reflects the past year’s trends both in terms of our everyday lives, challenges and overall state of mind.

It is essential to listen to your audience by detecting implied meaning and emotional context as well as written word. Do your emoji research and get the feel of your followers’ predispositions and aspirations. That’s just as valid of a customer feedback as the standard testimonial, if interpreted properly.

Learning to speak your target audience language could be a challenge, but the fruits of your efforts will benefit your long-term marketing communication strategy.

Have you heard of the famous Chevrolette’s press release that was written in emojis only? 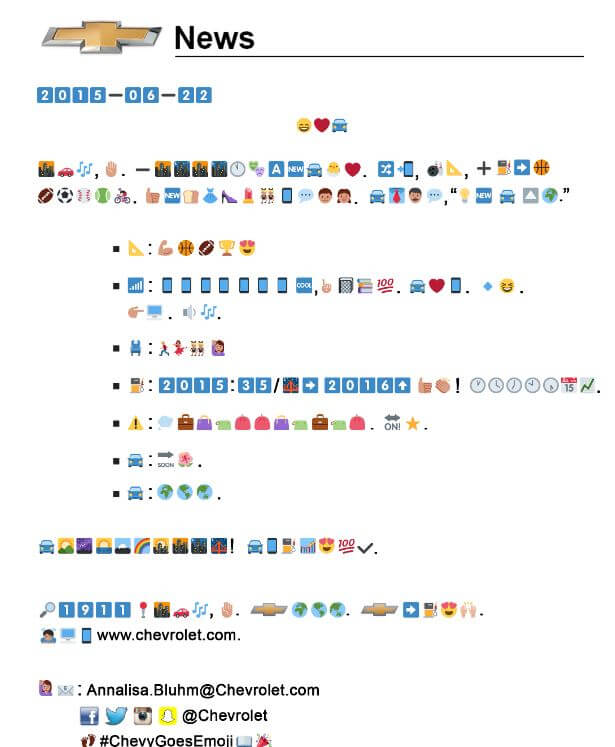 It got published on all kinds of high-tier online media outlets like Wired, Business Insider, Ad Week, etc. It’s an amazing marketing trick realized back in 2015. Do you think in 2021 the emoji’s powerful message has faded away?

You and me both know very well that emojis are here to stay, substituting our emotions, words and full sentences in our written speech.

With emojis transcending from text messages to social media communication, they are slowly making their way towards page url, web page titles, even to company newsletters. An emoji popping in the subject line or one smiling within the newsletter content – marketers are exploring this new way of communication with their target audience more and more frequently.

And why shouldn’t they? Emojis are a great diversifier and an attention trigger in the monotonous inbox list of incoming emails. Emojis save space when you are tight on character limit, they bring about a friendlier and more relaxed atmosphere, they give a personality to your brand and easily convey emotions or a specific mood.

Of course, emojis usage should be carefully planned and not be integrated in your online marketing strategy before you’ve done your research on your audience. Verticals that require a more serious attitude like law and finance, for instance, should carefully consider where they leverage emojis and in what context.  What do you think? How do you use emojis in your marketing communications? 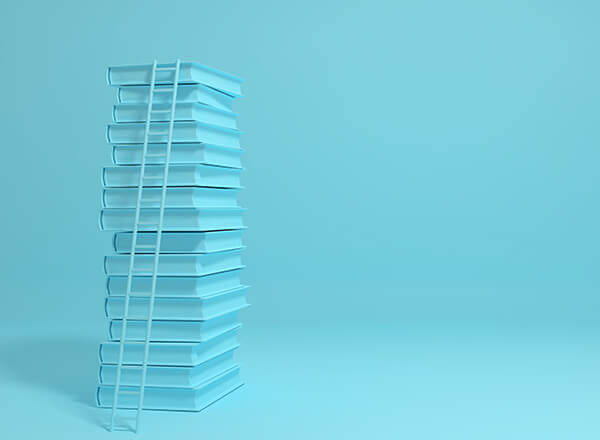 The Expert Panel was initially published at Forbes. Our founder and managing partner, Terry Tateossian, gives her take on the subject as well. You could read her  opinion under number...